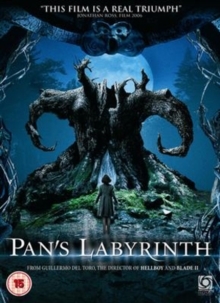 Ofelia (Ivana Baquero) is a young girl in a remote mountain village in Spain in 1944 after Franco's ascension to power.

To escape the upheaval and hardship her family faces (her father died in the war and her mother (Ariadna Gil) has been forced to re-marry to a despotic Captain in Franco's fascist army), Ofelia creates a world in her mind.

It's a beautiful place though not without its dark side but she's guided by a ghastly yet kindly fawn creature.

The Captain, it soon transpires, is more interested in the son Ofelia's mother is carrying, than he is in either Ofelia or her mother.

Mercedes (Maribel Verdú), the Captain's considerate servant, and Dr. Ferreiro the Captain's physician, are, it transpires, in league with the revolutionaries in the woods surrounding the army encampment.

These resistance fighters are intent on liberating the rationed food and medicines they need.

As the increasingly manic and paranoid captain assassinates anyone who looks at him the wrong way with alarming regularity, Ofelia's secret quests set by the fawn creature to unlock the portal to another world become more and more urgent.

With its deft mixing of CGI and actual character scenes, political and social statement, Pan's Labyrinth has been referred to already as 'The Citizen Kane of fantasy films'.